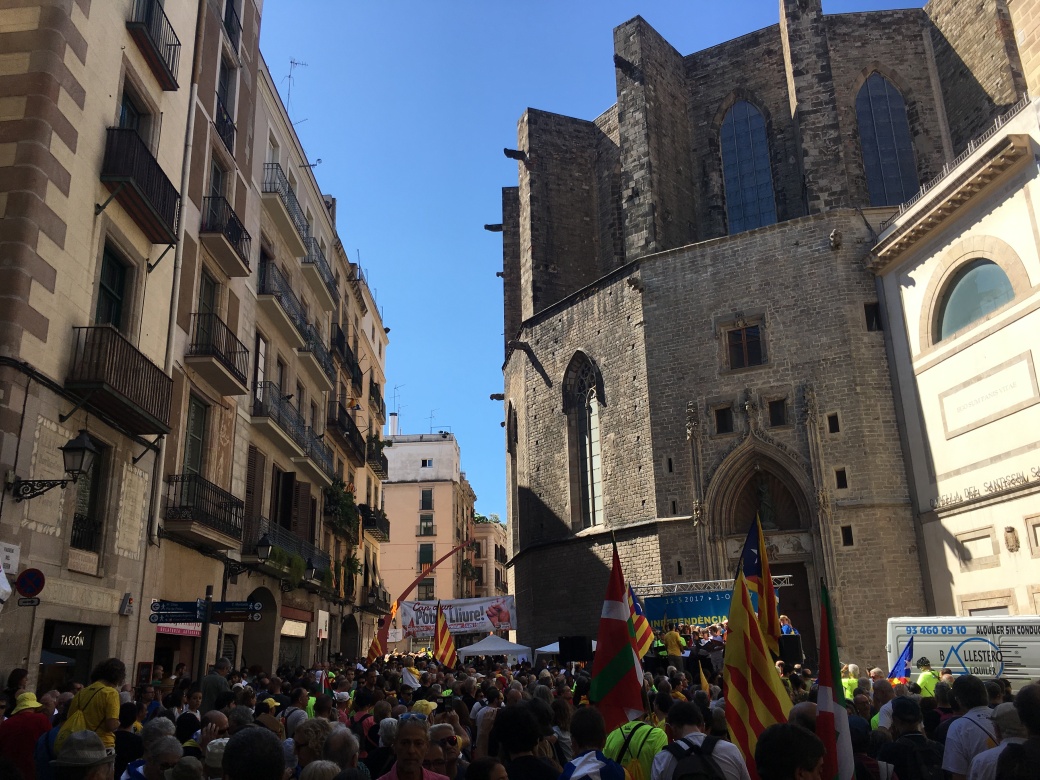 Outside my flat the bells of Santa Maria del Mar have just tolled, a helicopter hums above and below there is the din of the square: people’s laughter and cups clanking on the metal tables. The sound of the helicopter has become almost as habitual as the ringing of the bells since not only the Barcelona attacks, but in the lead up to the referendum on 1st October. Last night the bells were drowned out by the sound of pots and pans being banged throughout the city, a ‘cacerolazo’ in support of the referendum and as a gesture of defiance towards the Madrid government. 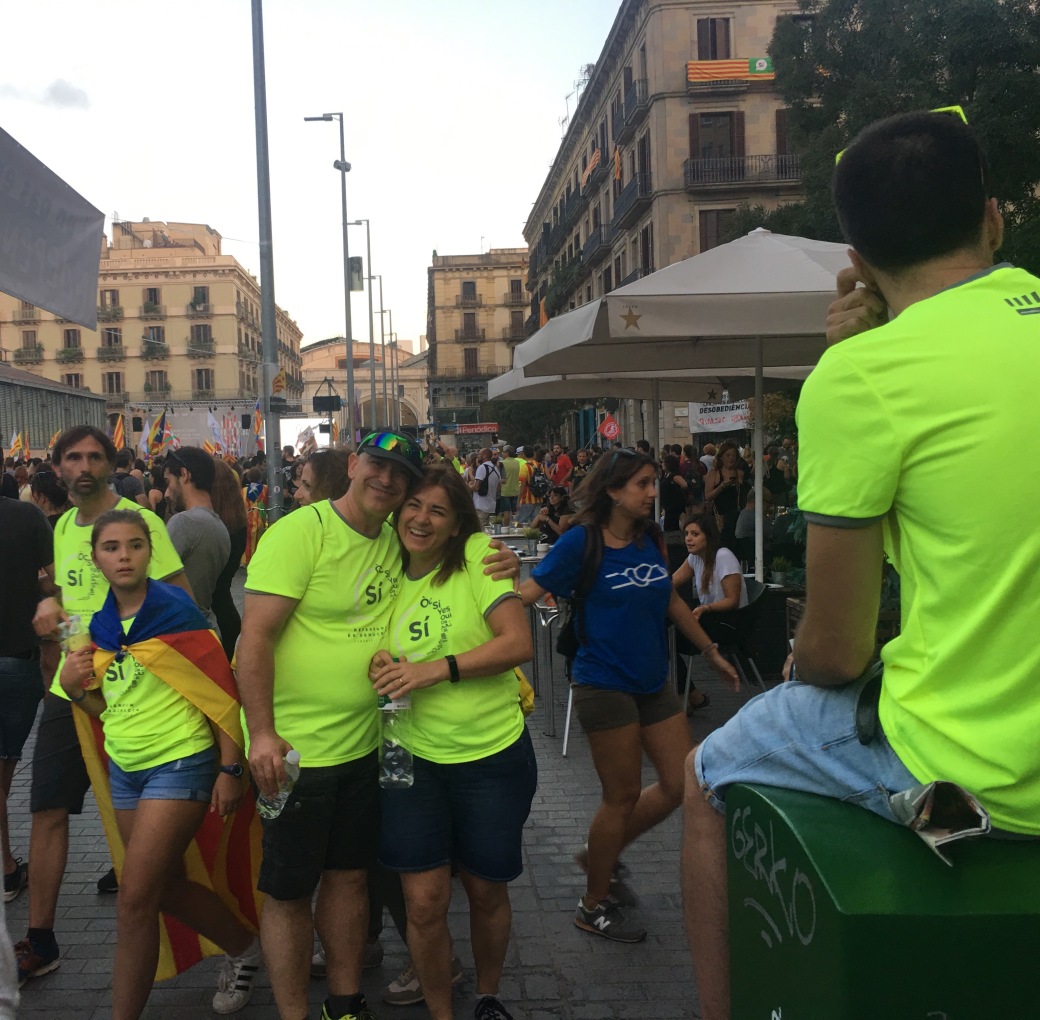 September is always a particularly patriotic month for the locals, as it is the month during which Catalans commemorate the fall of Hapsburg-supporting-Barcelona to Bourbon-supporting -Spain on 11th September, 1714; incidentally those same Bourbons who today are still Spain’s royal family. It is also the month where they celebrate ‘La Mercè’, the city’s patron saint. These events provide a platform for the ‘Leave Spain’ voters who turn out in their droves, or rather, in their fluorescent green t-shirts emblazoned with the word ‘Sí’ translated into ‘oui’, ‘yes’ and ‘ja’ among myriad other languages, to ensure that all understand the message being conveyed. At such events the mood tends to be upbeat, something helped by the numerous ‘Estrella’ beers being downed and food bandied about. One thing common to all Spaniards is their ability to turn any event into a quasi fiesta.

Having lived through Brexit last year and now with Rajoy’s actions encouraging those wavering voters towards the ‘sí’ camp, I once again find myself in a place where people define themselves by what they are not, by what they do not feel they belong to and by a resentment at paying into a system more than they feel that they get back. Discussing this with a Catalan friend this morning, he expressed dismay at his Spanish nationality, lamenting the fact that so much power is in the hands of so very few, very rich families. His words could have been the words of a Spanish Republican on the eve of the civil war, frustrated at the rich factory owners and ‘Latifundistas’ (rich estate owners). For many, Spain has not changed much since.

My Catalan friends are fiercely patriotic, furious with the Madrid government and frustrated by the impasse. Others, those from other regions mainly, but also many other Catalans, are fed up with the jingoistic Catalan rhetoric. It is interesting to note that the Catalan question, sympathetically reported in the UK’s left wing press, shares many of the same arguments being expressed by the Leave campaign both before and after Brexit. Catalans are fed up of paying in more than they get back. Tired of their money being spent in other parts of Spain. Frustrated that all the power lies in Madrid. Many want the right to self-rule, to spend the money how they see fit. Many Catalans view themselves as a people apart, distinct from other Spaniards, with as much in common with those north of the border as those down south. Their economy is one of the strongest in Spain. They would rather leave a union that they view as exploitative and as holding them back. Sound familiar?

In considering the arguments, it’s all too easy to forget those who rarely speak up, or at least not in public forums. Much as was the case with Brexit, there is often a mass of people who don’t comment on social media, who don’t take to the streets but whose voice is heard in the one place it matters the most, the ballot box. The Partido Popular, the ruling right-wing government, is considered far right by many Catalans, meaning that those who consider themselves more like British Conservative voters find that they have little political representation. Proud Catalans, but not pro-independence, they stay silent for fear of being labelled a traitor, or worse. Yet according to the polls it is they who are the majority, or at least, for the moment.

Each of these campaigns for independence, including Brexit, boil down to a feeling that more is being taken than given back. Worse, that the giving is not even acknowledged or appreciated, rather it is expected and taken for granted. So what is to be done? The hope with the Brexit talks is that pragmatism will prevail and common sense will lead to a good deal for all concerned; the fear is that pride and a need to punish will prevent this from happening. This is exactly the same as with the Catalan question. I can only hope that I don’t find myself a resident of one independent republic at war with its neighbours, whilst simultaneously a citizen of another country at war with its neighbours. Truly stuck between a Brexit and a Cata(lan)strophe.