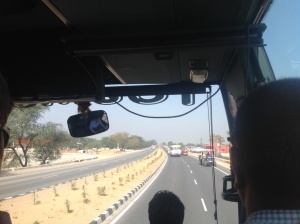 As we hurtled the wrong way down the dual carriageway it became clear that whilst in India they do still drive on the Left, they also drive on the Right. In India it is not a case of ‘as the crow flies’, more a case of ‘how an Indian arrives’. In this particular instance the service station was located on the other side of the dual carriageway and rather than have to proceed to the next turn off and then turn around, our driver employed the ‘drive now think later’ attitude in crossing onto the other side, following the maxim that ‘might is right’. Such assumptions of immortality are natural to all drivers on Indian roads and as a consequence bus drivers in India are heading straight for Nirvana. A joke in India tells of a driver and priest arriving at the Pearly Gates. The priest isn’t admitted, but the driver is, with the explanation that whilst the priest was doing his job everyone was sleeping, but whilst the driver was doing his job, everyone was praying. 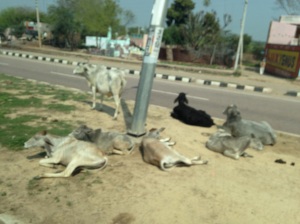 On my first visit to India I remember the bus drivers almost permanently driving on the wrong side of the road and with no seat belts; however, the driver did stop at every Hindu shrine along the way to pray. Given the fact we made it, it is hard to argue which is the more compelling case to be made. Insurance policies are largely regarded as unnecessary in a country where the overwhelming majority of the population is Hindu, with an accompanying belief in reincarnation. Indians must have found the Bond film title ‘You only live twice’ truly baffling .Why worry about your present life when you could be lucky enough to come back as a cow in India? Cows are considered the sacred mother god and are to be seen scattered across the streets of most of India, including lying in the middle of the traffic as 1.2 billion Indians go about their daily business. One of the most fascinating things to do in India is drive or walk around in order to see every aspect of human practices carried out by the side of the road. From the constant brewing of chai to washing in tubs and defecating in the fields, it is there to be witnessed by all who pass by.